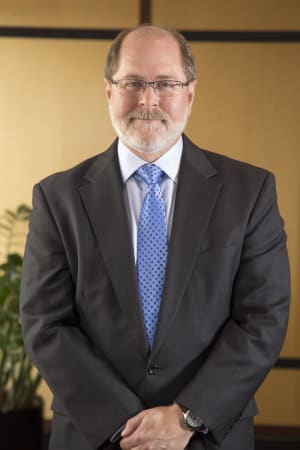 David Seely joined Fleeson, Gooing, Coulson & Kitch in 1984 after serving for two years (1982–84) as a law clerk to Hon. Earl E. O’Connor, Chief Judge of the U.S. District Court for the District of Kansas. Mr. Seely regards this as a unique learning experience that has been invaluable to his work in litigation.

Mr. Seely’s practice is focused on Civil Litigation. Much of this work in recent years has focused on complex litigation and class actions involving oil and gas. Mr. Seely has also handled litigation in state and federal courts on behalf of a variety of individual and institutional clients spanning a wide range of practice areas, including RICO, business litigation, civil rights, employment, insurance defense, personal injury, and church issues. He is recognized in The Best Lawyers in America in the areas of Oil & Gas Law and Labor and Employment Law, and in Missouri & Kansas Super Lawyers in the area of Civil Litigation Defense.

Mr. Seely served for six years on the Kansas Continuing Legal Education Commission, as both a member and as Chairperson of the Commission. He also served on a committee to review standardization of judicial procedures and forms in the federal court in Kansas. He has previously served by appointment as a member of the Tenth Circuit Advisory Committee (2007–08), the Bench-Bar Committee of the U.S. District Court (1999–2002) and of the Civil Justice Reform Act Advisory Group for the U.S. District Court for the District of Kansas (1997–99).

Mr. Seely is a co-author of the Federal Practice Handbook for the U.S. District Court for the District of Kansas (1997), and of “Comparison of Federal and State Court Practices,” 75 KBA Journal 28 (April 2006). He has also presented at various seminars on the topics of federal practice and procedure, and oil and gas law.

Mr. Seely’s litigation matters have resulted in a variety of published decisions, including:

“Kansas Cracks Down on Misclassification of Employees as Independent Contractors”
Federal Practice Handbook for the U.S. District Court for the District of Kansas (1997)
“Comparison of Federal and State Court Practices”; 75 KBA Journal 28 (April 2006)