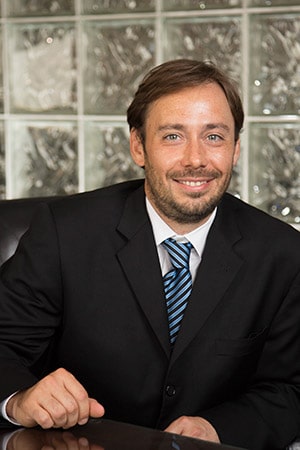 Roarke Gordon practices primarily in the areas of corporate business law and real estate. He regularly assists clients in the sale and purchase of businesses, including asset and stock transactions, the formation of entities, and contract negotiation and drafting. A significant portion of his practice concerns retail, restaurant, and office leasing transactions, from both the landlord and tenant perspectives. He also has extensive experience in transactions involving franchise relationships. Mr. Gordon’s litigation practice primarily involves contract and other business related issues, such as disputes involving fiduciary duties and business torts.

Roarke Gordon was born in Wichita, Kansas. He attended the University of Kansas and graduated with a Bachelors of Science in Business Administration. He was a member of the Business School Honor Roll and received several scholarships and recognitions for his leadership and academic excellence. Mr. Gordon received his Juris Doctor, with honors, from Washburn University School of Law in 2006.

Mr. Gordon joined Fleeson, Gooing, Coulson & Kitch in 2006 and became a Member in January of 2011. He is a member of the Wichita Bar Association and the Kansas Bar Association. Mr. Gordon volunteers his time on behalf of a number of community organizations and currently serves on the Board of Directors for the Wichita Symphony.