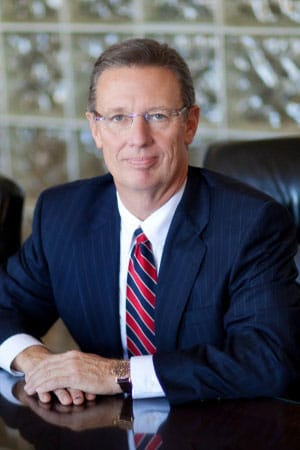 Bill Townsley was born in Great Bend, Kansas. He received his Bachelor’s degree from the University of Kansas in 1985 and his Juris Doctor, with honors, from Washburn University in 1989. While at Washburn, he served as the Managing Editor of the Washburn Law Journal, was a member of the national moot court team, and was inducted into the Order of the Barristers. He was admitted to the Kansas bar and joined Fleeson, Gooing in 1989.

Mr. Townsley’s practice focuses on resolution of complex disputes, primarily concerning personal injuries. He represents municipalities, employers, and insurance carriers and their insureds in state and federal statutory claims, workers’ compensation, and tort claim issues. He has successfully concluded hundreds of matters by motion, trial, or compromise, and has achieved favorable results before the appellate courts in Kansas including the Kansas Supreme Court.

Having litigated cases across Kansas, Mr. Townsley has been recognized by his peers as a Best Lawyer® (US News & World Report) in insurance law, insurance litigation and workers compensation, and has been named “Lawyer of the Year” on four occasions including 2020 “Lawyer of the Year” for insurance law; as a Top Corporate Counsel in workers’ compensation; as a Top Attorney in Missouri and Kansas by American Registry; and as a Kansas/Missouri Super Lawyer in personal injury defense. He proudly maintains an AV designation – the highest designation awarded by Martindale Hubbell.

Mr. Townsley is a member of the Wichita Bar Association (past President), Kansas Bar Association (Board of Governors, past-chair of Bench-Bar Committee, past-chair of Insurance Section and Litigation Section), Kansas Association of Defense Counsel (past-President), and Wesley E. Brown Inn of Court (past-President). He also has served the Wichita Bar Foundation (Board of Trustees) and the Kansas Bar Foundation (Trustee).

Mr. Townsley serves as Vice President and as a member of the Executive Committee of the Board of Directors for Kansas Legal Services, Inc..  He is a former member of the federal Bench-Bar Committee for the District of Kansas, as well as a fellow of the Kansas Bar Foundation and College of Workers Compensation Lawyers. He speaks frequently to professional associations and has presented the welcoming address to new citizens at Kansas naturalization ceremonies on several occasions. He is a member of the Lifetime Society of the University of Kansas and the Lincoln Society of Washburn University.

Mr. Townsley has been married for 40 years and is the father of four children. He supports the Wichita River Festival, Tallgrass Film Festival, ICT Fest, Symphony in the Flint Hills, Stout Ale Fest, and all of the other festivals and events that make Wichita a great place to live.

Some of the published appellate court decisions in which Mr. Townsley has been involved include: