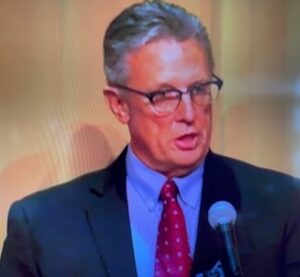 Fleeson Gooing attorney William L. Townsley III was the featured speaker at the Naturalization Ceremony held on April 8, 2022, at the Eugene M. Hughes Metropolitan Complex on the campus of Wichita State University.

At the ceremony, 166 individuals from 40 different countries took the Naturalization Oath of Allegiance and became United States citizens.

In his address to the applicants, Bill emphasized the important role that immigration has played in the development of our nation. “The fact is that we are a nation of immigrants. We must continue this tradition of inclusion and growth based upon our continued acceptance of individuals from around the world who have made the decision to renounce your former citizenship in other countries and have now pledged loyalty to the United States,” he said. “Our country grows and is strengthened by your inclusion as our fellow citizens.”

But Bill emphasized to the applicants that, although they were renouncing their former citizenship, they should not abandon their cultural heritage and history. “You each bring with you experiences and memories of your families, your religion, your music, your literature, and your history,” he said. “We all become enriched with the lessons and experiences that you share with us. These experiences shape your contribution to our greater culture. America is strengthened by your choice to become a citizen.”

Bill also reminded the applicants that with citizenship come responsibilities, such as the duty to participate in democracy by voting, and supporting the rule of law by serving as jurors when called.

He concluded: “As you pursue your journey as an American citizen, I hope that you have joy with your family and vocation and that you are successful financially. But more important is that I hope you’re successful in how you contribute to the American system of government and law. Help to make America strong and to keep it free.