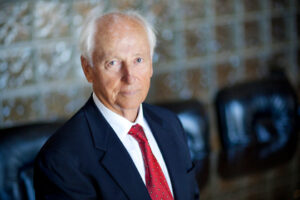 Bill joined Fleeson Gooing in 1959 and was a mainstay of the firm’s practice for almost 60 years. His association with the firm came naturally. The firm known today as Fleeson, Gooing, Coulson & Kitch, L.L.C. was established by Bill’s grandfather, C.H. Brooks, in 1886. It is one of the oldest firms in Kansas in continual operation.

Bill worked successfully throughout his career to remain state-of-the-art in multiple challenging practice areas, including business, corporate and estate planning and tax law. He was instrumental in training and inspiring the lawyers who followed him to settle for nothing short of his own rigorous quality standards in serving firm clients. These efforts paid off. Over the years, Bill was asked to represent many of the most influential individuals and businesses in South Central Kansas. These clients came to trust Bill not only for the quality of his work but for his unflinching integrity. There were instances throughout his career in which the only reason a complex business or family dispute could be settled was because all concerned trusted Bill and his views so thoroughly.

A factor that contributed to Bill’s success in building lasting relationships was his consistently modest and self-effacing personality. He was the kindest person many of us will ever meet, and kindness characterized his relationships with everyone from business and community leaders to his colleagues and the entire staff at Fleeson Gooing. He showed genuine interest in the lives of the people he came into contact with, without ever feeling the need to publicize his own achievements. He deflected praise instinctively, led by example and embodied all of the qualities associated with the word “gentleman” so completely that he could have been on a recruiting poster.

Bill somehow found time throughout his career to participate in charitable activities, often at the “executive committee” level. He served as President of the American Cancer Society (Sedgwick County Unit), the American Red Cross (Midway Chapter), Hospice, Inc., Kansas Foundation for the Handicapped, and Wichita Downtown Rotary and Wichita Rotary Charitable Fund, and on numerous other boards. He engaged in these activities instinctively, out of a belief that from those to whom much has been given, much is required.

We are grateful to Bill for the lasting impact he made on this law firm and its culture, and for the ways in which his professional activities and personal qualities improved the lives of so many people in South Central Kansas. We were lucky to know him.

Bill was preceded in death by wife Jane and son Mark. He is survived by wife Barbara, by sons Brooks and David, and by three grandsons. A memorial service has been scheduled for February 5, 2022 at 3 p.m. at St. Stephen’s Episcopal Church in Wichita.