At Friday’s business session, Fleeson attorney Lyndon Vix was presented with the Distinguished Service Award, given to a KADC member for exceptional 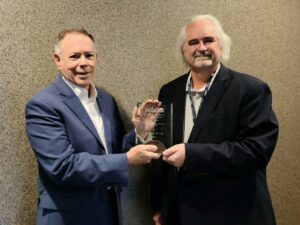 service to the KADC. Lyndon was recognized for his yearly presentation on caselaw developments at the Annual Meeting, his quarterly column in the Kansas Defense Journal, and his work in authoring amicus briefs on behalf of the KADC in a number of significant cases. The award was presented to Lyndon on behalf of the KADC by fellow Fleeson attorney Chuck Millsap.

Also at the business session, Brooks Severson assumed the role of KADC President for the upcoming year. Brooks has served in several leadership roles with the Association, including Board Member, Secretary, and President-Elect.

Ryan Meyer was the Secretary-Treasurer of the KADC in 2022 and Chair of the committee that planned the Annual Meeting. He will serve as President-Elect in 2023 and as President the following year.

Nathaniel Martens continues to serve as Editor of the Kansas Defense Journal, a role that he and Ryan have shared since 2018.