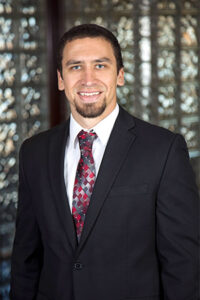 Fleeson Gooing attorney Nathaniel Martens has been named as one of the Wichita Business Journal’s 40 Under 40 for 2022.

The annual 40 Under 40 list recognizes 40 Wichita-area professionals under the age of 40 who are rising leaders in their respective fields. This year marks the 25th year the recognition has been given. Those named to the 40 Under 40 list will be honored at a dinner at the Wichita Hyatt Regency hotel on April 8, 2022.

Nate joined Fleeson Gooing as an associate attorney in 2016 after spending the previous two summers as a law clerk for the firm. He became a member in January of 2022.